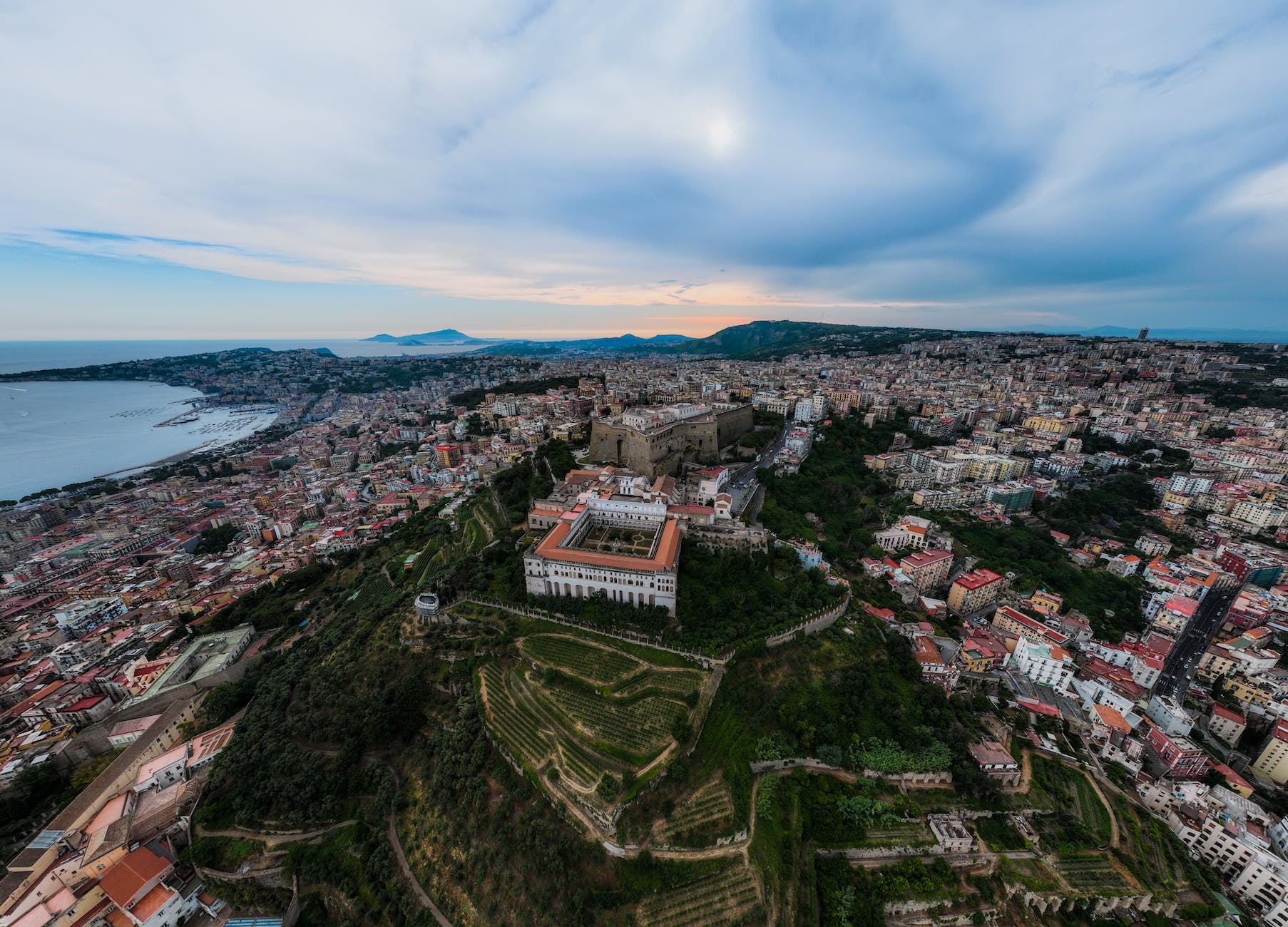 My parents came to Germany in the early 70s, in search of a better future. In summer 1974 as usual for summer vacations and Christmas, we traveled to our home country. It was one of my first conscious memories. Flying was not affordable for us at the time and so we had a, overnight train ride. It was a long journey to Naples starting from a side track on the station of the small city of Karlsruhe, where the wagons were prepared for the night. I had a hard time falling asleep in the rumbling train. Early in the morning we arrived to our first Italian station in Chiasso, the border patrol was having a look at our passports, as the fragrance of freshly brewed coffee came to my nose. A barrow boy was distributing the small paper cups for a few coins and my parents both bought a cup to thrust the sleepiness aside. After around 20 hours and some additional changeovers we were arriving at Naples‘ main station. Leaving the train was like jumping into a hot pool, full of chaotic odors and sounds, barely distinguishable from each other . After an hour or two, the noise separated into hundreds of voices talking in a language that I clearly understood, but rarely heard so frequently. People were singing and praising things they were selling at their „bancarelle“, others were just complaining about the general chaotic conditions, using words and sentences I wouldn’t dare to reproduce here. Odors were changing from the sweetness of Neapolitan „sfogliatelle“ to the fishy smell of melted ice dropping to a pond below the fresh exposed fish. We were walking over to the place, where my uncle Sergio was parking his Fiat 500 (yes! The original one from the 60s and 70s!). Our small luggage barely fit into the front boot of the tiny car. Nevertheless the Cinquecento, we four, and the luggage made it up on the hills to the house of my grandma and my aunts in one of the „upper“ districts of Naples. Traffic was tremendous, the city was pulsating, even late at night and I never will forget these first conscious impressions I had of Naples, the city were I was born around four years earlier.

We entered the hall of a ten- to twelve-floor condominium. Its large windows and the bright marble floors gave the entrance hall additional space and freshness in this warm Neapolitan evening. The whole ground floor was used up by a reception, a huge lounge and the apartment of the receptionist. A generous usage of space which would be unthinkable nowadays. My aunts were called to pick us up and we entered the small, old-fashioned and well maintained lift. My aunt Silvana dropped a tin ten lire coin into the box to activate the lift, pushed a white cylindrical button with the number 4 on it, and the we slowly started moving. As we exited the lift at the fourth floor, two locks on a big and heavy door on the left were being opened with noticeably loud clacks. Strange, as my aunt Silvana just left the apartment, but security came first these days of the seventies in Naples and so doors must be securely locked even when people were inside the apartment. My other aunt Vera and my grandma where peeking through the semi opened door, searching for this four years young boy they didn’t see since he was a newborn. We immediately embraced each other and exchanged kisses, to the left and right. My uncle Sergio told them: „Look, how tall the guaglione has become“ in his typical gruff friendliness.

I was immediately attracted to a glass door on the right, where I could identify a huge and dark shadow behind.

I preferred not to wear the house slippers. My aunt Vera pushed me to wear those fluffy house shoes, maybe to save the marble floor that was cleaned and polished every day. Nights were hot and sometimes humid in Naples, compared to our place where we used to live in Germany. The cool marble floors literally invited me to leave the slippers away and enjoy the coldness of the stone under my bare feet, so I left the slippers aside.

An hour later, after some brief talks about our journey, a snack and a cleanup, I immediately fell asleep in the bed of my grandmother. She must have come later so quietly, that I didn’t notice. The next morning I was the first one to be awake… at least I thought I was. My grandma was still sleeping and I tried to get out of bed as slowly as possible not to wake her up. My aunt Silvana was already cleaning some leftover dishes from the previous evening in the kitchen, she definitely was an early bird. She started preparing a caffè-e-latte for me as soon as she saw me. It was the first time, I was drinking coffee in my life, and this shouldn’t remain the only passion that started right this first day of consciousness in Naples.

Refreshed and boosted by the coffee I started my first discovery of the apartment. I still was curious about what was hidden behind the glass door, as I took a look at the living room first, raising the tension and curiosity about this mysterious room even more. A beautiful Art-Deco sideboard immersed the whole room in a flavor of old mahogany and shellac polish. The glass inlays of the doors were beautifully engraved with stylized flowers, giving the heavy dark furniture a light elegance. The pattern repeated on a cabinet from the same collection. I stepped out to the balcony and caught a short glimpse of the streets of Naples below and the houses surrounding us.

After this short distraction, it was time to have a look behind the glass door. It was slightly open and literally sucked me into this room with the huge dark shadow, accompanied by the bright morning shining through the window on the northern side of the apartment. Again the flavor of shellac polish and old wood came to my nose. This time somehow mixed with strange metallic odors I couldn’t identify. There it stood in front of me. A huge grand piano, I can’t remember if it was 220 or 240 cm, from a German manufacturer I also cannot recall the name of. It was just too long ago to remember those details, but not long enough to forget this feelings of awe and curiosity, fighting each other in my head. I started touching the side, following the line with my fingers, I made sure they were clean before. I felt the curvature of the body, barely touched the edge of the slightly lifted cover and risked a look into the inside of the piano. The metallic odors were more intense here, coming from the steel frame, the brass of the pins and the copper of the strings.

Even the fall board was opened, giving me an unobstructed view on the ivory and ebony keys. Yes I know, it‘s an evil material, nevertheless, it is the way keyboards were built in former times. I‘ll never forget the slight color imperfections, that gave the ivory key a particular texture. I slightly touched a key without pressing it down and immediately felt the slight tension on my skin, when I was trying to slide my finger down a little bit. Just as much grip as required to give a steady yet not sticky feeling. I startled as I slipped down to the very end of the key pushing it down. The hammer was pushed upwards and hit the string, producing an impressively loud and intriguing sound. My aunt Silvana was standing in the door already, probably the whole time of my discovery. She seemed to enjoy the way  I was approaching and slowly getting familiar with the instrument, she nodded her head encouraging me to continue.

„The piano is perfectly maintained“, she told me. „It was tuned just last week, as we expected your visit“, Silvana told me. Everything in this room had been prepared the day before, just for me, the young guest of my aunts and my grandparents. She told me about a cousin who was the only one, playing this grand from time to time.

I immediately started fiddling with some easy melodies I had in mind, and it took me around an hour to really get familiar with the instrument. I carefully observed the keyboard mechanics as they were moving on my fingertips. The felts being slightly compressed when they touched the strings, the strange feeling of the whole keyboard moving, when I was tapping on the una-corda pedal, I barely could reach when sitting. Silvana was patiently eavesdropping each and every little melody I was trying to play. She just enjoyed, seeing her four year old nephew discovering the joy of playing music on such an impressive instrument. One after the other silently entered the room and listened to a few notes, some had tips, what I could try to play next. Some others, like my mother Carla, just listened.

I had many of these days during our summer vacation. But everything comes to an end at some point, and so also did this summer of 1974. We traveled back by train. The impressions of the city, the sea and this magnificent experience all together, accompanied my thoughts the whole journey back home. From this time on I knew, someday I will enjoy coffee as my parents do everyday and I will definitely learn to play piano.

We were living in a small apartment in Karlsruhe, owning a piano was far out of reach as we neither had the space nor the money. For many years, our visits to Naples remained the only chance to get my hands on the keyboard. That all changed around five years later. My parents started their first restaurant, including a student tavern in the basement floor. There it was! The old piano was optically heavily used but mechanically in a good state. After a longer tuning and maintenance, it was just perfect for a young piano student. There my journey started with increasingly demanding piano teachers working on my skills and discipline. Even after so many years my passion for playing this instrument was still burning and I made my way from the easiest beginners exercises to a fairly skillful playing.

In this series of articles, „Passion“ is the hardest to explain, as there‘s no methodical approach to achieve passion. I often hear people talking about things like talent or a gift of whatever entity, when they in fact mean passion. Passion is born within a multitude of sweet impressions and good experiences, when body and mind are open to new discoveries, when something is able to conquer our full attention, when it is able to wow us, to get anchored in our mind, and to trigger our reward system. Passion is what makes us overcome our inner laziness, to spend time and effort, to face the long and tedious journey, and to overcome the obstacles and setbacks when practicing an art or trade.

This personal experience I shared with you is about a perfect moment in life, where everything was setup just right to trigger this passion. You may recognize what made you decide to start playing an instrument, to sing, or to do whatever you enjoy and whatever you are able to do with aptitude and addiction. You may find some inspirations in this story, if you want to help your children discovering their own passion, whether it is something they will do for the means of making money or just to enjoy and relax themselves. Passion is born out of the right moment, in the right space and by the right mood, so there‘s no way to force it, you just have to perceive and receive it.